Home / Food / The Lobster Club Does Japanese, From Raw to Half-Baked

One thing that sets Rich Torrisi and Mario Carbone apart from other very talented chefs is how happy they seem to be creating restaurants that are not about them, or even primarily about cooking.

While their peers were putting their kitchen skill front and center, through tasting leather menu covers for restaurants or through restaurants where decoration was minimal and amenities were pared back until there was almost nothing left but the plates, they went in the opposite direction.

From their first restaurant, Torrisi Italian Specialties, inside a fake Italian grocery store, their places have been highly distracting in ways that serious chefs tend to shun.

The interiors are ornamental and over the top; the servers are dressed in uniforms that we might as well call costumes; the playlists are what your friend for whom entertaining is a life-or-death matter would put together for a highly specific theme party.

Other chefs would have worried that their precious food would be overshadowed by the rest of the production. Mr. Torrisi and Mr. Carbone always seemed confident that wasn’t going to happen. Before they opened their Japanese restaurant, the Lobster Club, they were right.

Now two months old, the Lobster Club is the third and final stage in the annexation of the Seagram Building’s dining spaces by the Major Food Group, run by the two chefs and Jeff Zalaznick. The first two stages were the Grill and the Pool, carved out of what used to be the Four Seasons.

The Lobster Club sits under the Pool in a space that was originally a 24-hour brasserie. Vintage East Siders such as Peter Marino, the architect who designed the Lobster Club, still talk about dropping into the Brasserie for onion soup after writhing the night away at Studio 54. 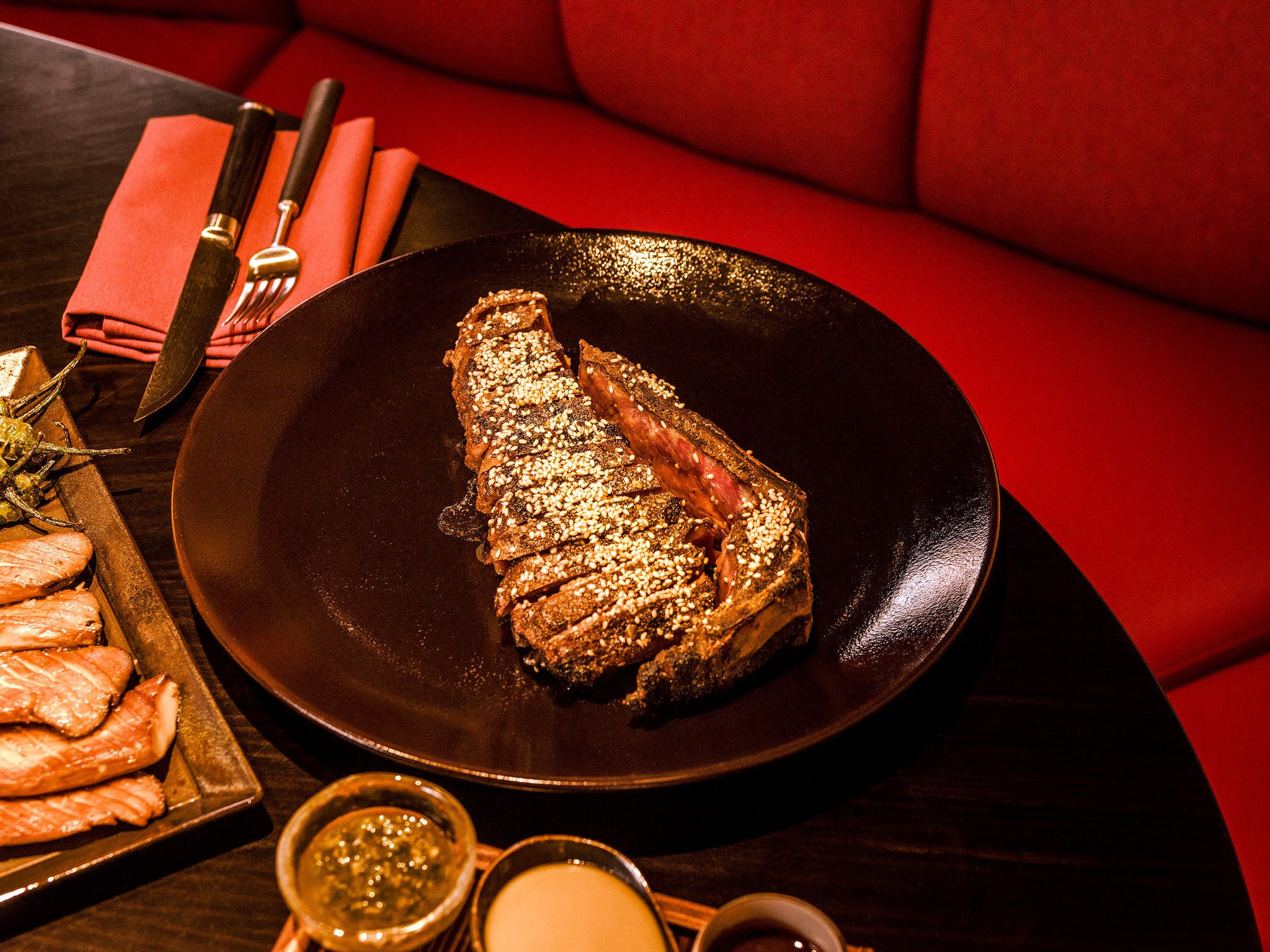 Mr. Marino apparently wanted to bring the party back. From the top of the stairs just inside the entrance, on East 53rd Street, a scene from Fellini seems to be playing out.

A big square lounge in the middle of the room is bounded by zebra-striped panels of white ebony. Spurts and dribbles of paint cover the floor and the black trousers that some of the servers are wearing. It looks as if Jackson Pollock were called back for one last job.

On the walls are prints Mr. Marino made from paintings he owns. The originals were painted by Richard Prince, modeled on paintings by Picasso. The Prince Picasso-painting prints have themselves been painted, gone over by Mr. Marino with thick pigment in a completely different style.

Marvin Gaye is singing. He wants everybody to know that sexual healing is something that is good for him.

Round tables are surrounded by pink lounge chairs that look, from behind, like enormous cartoon lips. The booths are upholstered in a chartreuse camouflage pattern, a useful fabric if the Army ever needs to hide in a green neon jungle.

Blending in at the Lobster Club in winter means fur coats and designer sweaters. A man with silver hair, a double-breasted blazer and a pocket square is circling the perimeter, swiveling his head, an eager expression in his eyes, as if he had been told there would be a limbo pole.

On the right, a big group is sitting around a skinny table that can be partitioned from the rest of the dining area by drawing a floor-to-ceiling curtain, as in an operating room. The curtain is made of black leather.

Isaac Hayes is singing now. He has some thoughts to share about a black private dick who’s a sex machine to all the chicks.

What kind of Japanese restaurant is this?

It would need to be a sensational one to compete with the rest of the goings-on. It is not. In fact, the Lobster Club seems to be making an effort not to be sensational. The cooking, as a whole, suggests Japanese food as seen through American eyes at some point in the recent past.

There is no soup, no noodles, no tofu and few vegetables. But there is salmon teriyaki, made more meticulously than any I’ve ever seen, with a dark-pink medium-rare core and a translucent, unsyrupy glaze.

The core of the leather menu covers is steak and seafood cooked on a teppan, the steel grill introduced to the United States by the original Benihana, which by the way is still in business a few blocks away. Not that Lobster Club is an explicit homage. If its cooks are juggling spatulas and flipping shrimp into the air, they are doing it behind closed kitchen doors.

The Equestrian Coach Who Minted Olympians, and Left a Trail of Child Molestation
My Wagyu skirt steak was a far better product than anything I remember from Benihana. Ditto the teppanyaki king mushroom stems that accompanied it along with more shishito peppers than I needed and more sauces than I can name. The mustard miso was my favorite with steak; for grilled scallops, I would go with the yuzu chimichurri.